Many people don’t know the right way to de-shell and cook lobster.

Sometimes people are confused by the shell, and it can be hard to know which lobster parts you can actually eat.

You might look at a lobster and not know where to start when it comes to de-shelling the tail area.

Not to worry, we are here to help. Do you need to brush up on how to de-shell a lobster? Are you a beginner to lobsters altogether?

You don’t have to take a chef course to learn how to deshell a lobster tail; it’s quite easy actually. 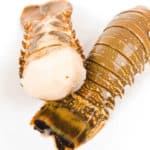 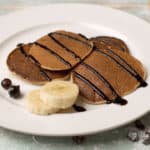 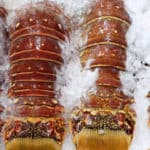 How To De-Shell Lobster Tail?

The easiest way to de-shell a lobster is to start with the tail. You need to hold it tightly on the sides and then push the edges of the lobster shell underneath together, which will create cracking noises. This will break the cartilaginous material underneath the tail, allowing you to easily remove the tail meat.

Is It Easy To De-Shell Lobster Tail?

The first few times, it can seem complicated, but once you know how to do It, it really isn’t flippers facing you.

Have your thumbs on each opposite side. Now you need to pull back on both sides, which will crack open the shell so you will be able to remove the meat.

Rinse the meat under cold water, which will get rid of the green tomalley.

Dry the meat with paper towels, then use a paring knife to remove the dark vein from the tail.

You can also grasp the tail with one hand and the body with the others and twist really hard and fast.

Others prefer to slice with a knife right down the middle of the lobster tail to help keep it in one solid piece.

I like to lay the lobster on its side and use my hands to apply force until the shell cracks. This can be a little messy if you are new to deshelling lobster tails.

If you like the idea of cutting the tail, you will need to hold the tail with one hand and make sure the hard shell is upwards.

Grab a pair of sturdy kitchen shears to cut through the shell and through the lobster meat but ensure you stop just before the bottom shell.

You want to avoid cutting through the bigger end of the tail.

Using your hands, you need to spread the halves of the tails apart but make sure that you keep the meat connected right near the end of the tail.

You can separate the meat from the hard shell as long as you keep the base attached. This will allow you to lift the tail meat right over the top of the shell.

Now you can squeeze each half of the shell beneath the meat, so the tail meat is now sitting on top of the shell. The tail can now be cooked as you wish.

What Is Butterflying Lobster Tails?

When you are butterflying the lobster tails, it means you are cutting through the hard shell and then spreading the meat into two equal parts.

The tail meat that is underneath the hard shell will end up puffing up as it starts to cook. The meat is extra juicy, tender, and truly something to brag about.

How To De-Shell The Arms

First, you need to remove the claws and the knuckles that are attached. The knuckles are the small jointed sections.

You can just twist the knuckles, which will help to remove them from the claws. Using a chef knife, you can break the knuckles into 2 sections right at the joint.

You can also use a lobster cracking tool which makes the job easier. You can now use a skewer to help push the meat out of the lobster.

For this part, you need to wiggle the smaller portions of the lobster claws in order to separate them.

If the meat doesn’t come out easily, use a skewer. Grab your lobster cracking tool and break open the claws. Remove this meat also.

Now To Finish With The Legs

You can twist the legs to snap them from the body. Lay the legs on the counter, and starting from the claw, use a rolling pin and roll over towards the open end.

This will force the meat out. Make sure you stop rolling when you reach just before the ends of the legs.

If you don’t, you run the risk of cracking the tip open and which will release pieces of shell into the meat.

While it might seem hard to de-shell a lobster tail, it isn’t too hard at all. Read up on your tips and learn from personal experience the best way to do this process.

That is how I decided the cutting method worked best for me. It might be frustrating de-shelling the tail but think of the tasty, juicy meat that is going to end up on your plate.

Find some recipes that complement lobster tail, and you can then serve up a gourmet-styled meal.

Frequently Asked Question About How to De-Shell Lobster Tail

Do I Need To Remove The Vein In Lobster Tail?

The black vein in the tail of the lobster contains the feces. You need to remove this, which can be done by grasping the vein at the end where it meets the body and pull the vein away from the meat.

Do I Have To De-Shell Lobster Tails Before Cooking?

If you don’t want to de-shell lobster, you can still cook it. Cooking the tail in the shell creates great flavor, and the tail will remain in its shape. It also makes it easier to remove the meat from the shell when it’s cooked.