Ginger is a popular root vegetable that is used in a wide variety of dishes. You’ll see it used in soups, stir-fries, and even some baked goods.

After fetching your ginger from the refrigerator and slicing it open, you may notice that its flesh now has a greenish tint to it. Can you still use that piece of ginger?

Find out the answer to that question and other relevant topics by continuing with the rest of this article.

Ginger Is Green Inside

A piece of ginger may turn green if it is overtaken by mold. Aside from green, patches of mold may also be colored black or white. The discoloration of the ginger’s flesh may also be accompanied by the appearance of fine patches of hair. Consuming moldy ginger is not recommended as it can cause an upset stomach and other troubling symptoms. Consider either discarding the moldy piece of ginger or trimming away the mold before consuming it.

Why Did My Ginger Become Discolored?

The distinctive flavor of ginger is something many of us crave. Its distinctive sweetness can add a new dimension to a dish while its spiciness offers a nice bit of warmth that doesn’t quite reach the level of most peppers. 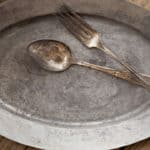 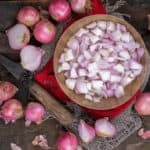 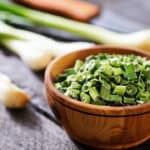 If you buy a lot of ginger whenever you go to the store or the farmer’s market, then you likely end up with plenty to spare after cooking. That shouldn’t be an issue since you can just store your leftover ginger in your refrigerator.

Unfortunately, you may find that your stored ginger’s appearance has changed significantly since you first put it inside the refrigerator. To be more specific, its color may have changed.

The trademark yellow color of the ginger’s flesh may now also feature some patches of green. You may also find patches of black and white on the flesh.

So, what happened there? The likely culprit is mold.

Ginger is susceptible to mold and that fungus may take over the vegetable if you aren’t careful. Let’s discuss the different reasons why mold may take over a piece of ginger below.

1. The Ginger Was Exposed to Moisture before Storage

According to Garden Guides, pieces of ginger may end up covered in mold if they get wet.

Something like that could have happened while you were cooking. You may have set down a chunk of ginger on a wet spot and just failed to notice it.

If you still stored that wet chunk of ginger, then there is a good chance that it will become moldy.

You should either use that wet piece of ginger immediately or just discard it. Storing it will not do you much good.

2. The Ginger Was Not Stored Properly

Ginger must be stored properly because it will end up moldy otherwise. Storing ginger properly can be done in a few different ways.

First off, you can store an unpeeled piece of ginger directly inside your refrigerator. The peel should protect the flesh from moisture and that will allow it to remain fresh.

Storing ginger that has already been peeled is still possible, but you will either need a vacuum-sealed bag or an airtight container. Moisture can penetrate other containers so they may not be able to protect the ginger properly.

As long as you have a good container, storing ginger in your refrigerator should not be an issue. You can even store the ginger longer if you put it inside your freezer.

3. The Ginger Was Stored Next to Something Moldy

Mold can spread through contact. If you had a different moldy fruit or vegetable on your countertop that was placed next to your ginger, the latter may soon end up covered in that fungus.

Hopefully, you can spot the moldy item early and prevent it from causing problems. If that doesn’t happen, then your ginger may be vulnerable to mold infestation.

Is Moldy Ginger Safe to Eat?

Let’s say that the ginger you stored has indeed been overtaken by mold. Can you still cook with it?

At that point, no, cooking the moldy ginger is not recommended. Eating moldy ginger can lead to an upset stomach.

People allergic to mold are also likely to experience a reaction after eating moldy pieces of ginger. Your liver may also sustain some damage from your choice to consume discolored ginger voluntarily.

If you still want to use the moldy ginger, you can remove the small portion that has been infested using a knife. However, using ginger that has been overrun by mold is no longer safe.

Ginger that is completely covered in mold should just be discarded.

What Are the Other Signs That a Piece of Ginger May Be Infested by Mold?

The discoloration may not be strong enough for you to confirm that the piece of ginger you’re planning to use is moldy. In that case, there are other things you can look for to confirm if your ginger is still safe to use.

Start by taking a closer look at the chunk of ginger that you think is discolored and search for hairs. The hairs may resemble a patch of fuzz as they emerge from the flesh of the ginger.

The smell of the ginger can also clue you in to its current condition. Moldy ginger tends to have a musty odor that can be quite unpleasant.

The taste of ginger will also change if it has been infested by mold. It will lose its signature flavor and taste more like spoiled food.

Conclusion to Can You Safely Eat Green Ginger?

The presence of a green hairy patch on a normal piece of ginger is not a good sign. It typically indicates that the piece of ginger has been infested by mold. Don’t bother cooking with that ginger because it could just end up making you sick.

Frequently Asked Questions about Can You Safely Eat Green Ginger?

How Long Can You Safely Store Ginger?

Raw ginger should only be stored inside the refrigerator for up to one week at most. Anything longer than that and you risk potential spoilage. The maximum storage time remains the same whether the ginger remains whole or if it has been processed in some way.

Do Some Types of Ginger Naturally Feature Patches of Green?

Yes, Chinese white ginger and some variants of Hawaiian ginger are known to feature small patches of green. Those green patches are not mold. They are simply natural traits of those ginger variants.