Both of these kinds of rice cakes do go off, but Korean rice cakes go off much faster than ones made of puffed rice.

Korean rice cakes go off after three days, while puffed rice cakes can last up to a year if stored properly.

Rice cakes do go bad. Korean rice cakes go off in as little as three days, even when stored in the refrigerator. They can be frozen for three months. Puffed rice cakes can last up to one year, provided they are stored properly. There are many other different kinds of rice cakes around the world.

Many Kinds of Rice Cakes

There are many different kinds of rice cakes, especially in Indian or Asian cuisines. 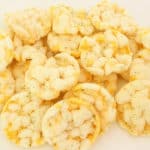 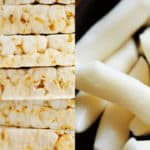 Most of the rice cakes around the world are made of rice cooked to be sticky enough to make into shapes, or rice grains soaked overnight and then ground into a powder.

They can be eaten plain, with toppings, or part of a dish.

For purposes of this article, we’ll just focus on two kinds of the most popular rice cakes in North America – Korean and dry cakes made of puffed rice.

Most other kinds of rice cakes from traditional Asian cuisines are made and served in a way similar (although not identical) to Korean rice cakes.

The main quality that Asian and Indian rice cakes share is that they’re wet.

Moisture attracts microorganisms like bacteria and mold spores that cause food to spoil and get you sick if you eat it.

That’s why Korean or other wet rice cakes go off after three days, even if they were stored in a refrigerator.

Puffed rice cakes in North America are usually round, but they’re square in China.

Both of them store for a very long time.

They tend to go stale long before they start going moldy or growing anything else that could get you sick if you ate them.

Puffed rice cakes do go stale quickly if they are not stored properly.

Puffed rice cakes are usually sold in bags with twist ties, like loaves of bread.

Some will come in cardboard trays.

Once the outer packaging is removed, these need to be placed in a plastic storage bag, by using a vacuum-sealer or an air-tight storage container.

Place in a cool, dry area and they will be good for up to one year. Avoid storing them in cabinets near ovens or heater vents.

For taking puffed rice cakes on the go, place them in an individual storage bag or wrap them in a sheet of aluminum foil.

Some people find it’s easier to wrap them if you cut them into squares first.

They need to be refrigerated and eaten in about four days, or they go so stale that you could hurt your teeth trying to bite down on one.

They also lose their flavor after a few days.

This is because the moisture that inevitably happens as part of the freezing process greatly changes the flavor and texture.

When trying to thaw them out, they often become soggy.

The Food Network states that can freeze rice cakes for one hour with a creamy filling to make a sweet, crunchy treat, as long as they are eaten right away.

You can buy uncooked Korean rice cakes or make your own. Either way, storing them is about the same.

Uncooked Korean rice cakes you buy in the store are often sold in vacuum-sealed packaging.

This will keep them fresh until their expiration date.

Once you open the package, the clock starts ticking. They need to be used soon.

Place uneaten cooked or uncooked Korean rice cakes in an air-tight food storage container and keep them in the refrigerator for up to three days.

You can also use a glass jar with a lid screwed on tightly.

If you buy a large single cake that later needs to be sliced for use, finding a container large enough to fit may be a problem.

You may need to slice the rice cake in order to store it.

There is some debate as to what part of the fridge is the coldest. Usually, it’s the back of the bottom shelf.

If your refrigerator has an icemaker in the door, then the coldest spot will be the area nearest the ice maker.

This is the area where it’s best to keep food fresh enough so the taste does not change.

Korean rice cakes can change in taste after only a couple of days, so they may still be safe to eat for a day, but taste different.

Korean rice cakes can be frozen, whether they are plain or with sauce. Place in a freezer-safe food container.

They should be good for about three months. Be sure to eat within three days of defrosting, or they’ll go off.

Korean rice cakes made with eggs or meat may change texture after they defrost.

Can You Get Sick from Rice Cakes?

Any food can get you sick if you do not use clean hands when making it or storing it properly. Rice cakes made with wet rice or rice powder tend to go off faster than cakes made from puffed rice. Whenever you are in doubt, throw the rice cakes out.

Do Rice Cakes Get Moldy?

It’s possible for just about all food to grow mold if the conditions are right for mold. Korean rice cakes can come with black specks, but those specks are from rice bran and are safe to eat. However, Korean rice cakes do go off quickly, so they should be eaten within three days of opening a store-bought package or making your own.

What’s the Black Stuff on My Puffed Rice Cake?

Puffed rice cakes can also get black specks. These are burnt bits from the cooking process in the factory. They are safe to eat.

The Least You Need to Know

Korean rice cakes need to be refrigerated. They last about three days in the refrigerator.

They can be frozen for three months.

Puffed rice cakes, the kind of rice cake best known in North America, can last up to one year if stored in a cool, dry place.

They do not do well stored in the freezer, since they get wet from the ice that inevitably forms on all frozen food.