A banana is a perfect energy-rich breakfast food, but the main drawback is that it goes bad so quickly.

It seems like bananas fresh from the store turn brown within the blink of an eye, but brown bananas aren’t necessarily lost.

There’s a big difference between bananas getting a little bit brown and soft versus being black on the inside.

Learning to recognize the difference between usable and bad bananas will make sure you don’t throw away bananas that are still good but don’t make yourself sick with spoiled produce.

Banana Black In The Middle

Bananas that are black on the inside are not safe to eat. They can be suffering from something known as the black center syndrome. This is caused by either a fungal infection or a factory defect that led to an exposed center. 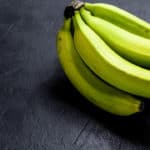 Only the Core of My Banana is Black – Is it Safe to Eat? 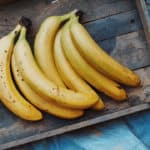 4 Things You Need to Know About Banana Black Center Syndrome 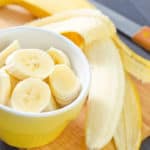 Why Are There Black Spots Inside a Banana? 4 Reasons! 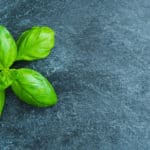 Can You Eat Basil That Has Turned Black? Let’s Find Out!

It’s possible to cut out the black part and eat the rest of the banana, but the safest thing to do is just throw it out.

Chimpanzees are adapted to eating fungus-laden bananas, but humans are not, and eating a banana that’s black in the middle can lead to a digestive catastrophe.

Brown bananas are okay, but black bananas? Not so much.

Black center syndrome is a real problem and can start out when a banana is dropped in a factory setting.

Bananas are very fragile once ripening, so unless the handlers and distributors are very gentle, they run the risk of inducing black center syndrome.

A black center in a banana indicates the presence of a fungus known as nigrospora, which can cause digestive issues like vomiting and diarrhea in humans.

Nigrospora fungus can also manifest as a very dark red, which can appear as black.

There’s a difference between a bruised banana, in which the discoloration is local to one spot, and a banana with black center syndrome. The black center will typically run the length of the banana and be somewhat hard rather than soft like a bruise.

If you’re wondering why bananas can get bruised and somewhat mushy, it’s because bananas are a berry. In the same way as strawberries and blueberries can become soft without having gone bad, so can bananas.

Bananas with a hard, dark center are probably dangerous to eat, but even bananas with very dark skin can still be good. Especially when used in baking or as part of a recipe, a soft banana with dark skin can take on a very special sweetness.

Only the Core of My Banana is Black – Is it Safe to Eat?

4 Things You Need to Know About Banana Black Center Syndrome

Why Are There Black Spots Inside a Banana? 4 Reasons!

Can You Eat Basil That Has Turned Black? Let’s Find Out!

It is possible to remove the black center from the banana, with the remaining white flesh still good to eat. However, if you want to be on the safe side, it may be better to throw the whole thing out.

Another key indicator of bananas that have gone bad is the smell. Even if your banana looks mostly normal, if it has some black center and a strange smell, it’s best not to eat it.

However, if your banana smells sweet and somewhat like alcohol, it may have lightly fermented. This does not mean it has gone bad.

Food waste is a major problem today, so no one wants to throw away produce that’s perfectly edible. Bananas are hearty and substantive, but it can be difficult to use them at their peak of freshness without risking that they become overripe.

If you allow your bananas to ripen together, they will ripen faster. Typically, a bunch of bananas that are bought slightly green will take 1 to 5 days to fully ripen.

The chemical that causes bananas to ripen is called ethylene, so storing ethylene-producing fruits together can concentrate it and speed their ripening.

However, bananas also need oxygen to ripen, so storing them in a polyester “banana bag” can slow the process down, possibly causing them to last up to two weeks.

Conversely, a paper bag can speed along ripening by concentrating ethylene and being breathable enough to allow oxygen in.

Most ethylene is released from the broken stem at the top of the banana, so covering that stem with plastic will also significantly slow down ripening.

Another tactic to slow down ripening is to wash bananas in something acidic, although the effects of this are somewhat disputed. You can buy a wash specific to this purpose, and home remedies include common acids like lemon/lime juice or vinegar.

Bananas are such a versatile fruit, great for baking, breakfast, and a snack at any time of day. Rich with potassium, they are a treat that can be equal parts healthy and sweet.

The more bananas ripen, the sweeter and softer they are, so how long you let them ripen really depends on your personal taste.

Whether you use a ripening bag or let it go au naturel, carefully monitoring your ripening bananas will ensure you get the perfect firmness and sweetness, while avoiding any adverse effects.

Frequently Asked Questions About Banana Black In The Middle

How Can You Reduce the Risk of Bananas That Are Black in the Middle?

There are a few measures you can take to reduce the risk of bananas that get black in the middle, such as storing them at a consistent temperature. Bananas that are too cold or too hot will become inedible. While ripening, bananas should be stored in a cool, dry place.

What Recipes Can You Make By Browning Bananas?

One of the best recipes to make with bananas that are browned and soft is banana bread. To brown your bananas for banana bread while ensuring that they don’t go bad, sometimes it’s best to let them brown in the freezer. Soft bananas are easier to mash and adding them to your bread batter gives a great natural sweetness and moisture.

Is It Okay to Eat Underripe Bananas?

Banana ripeness is really a matter of personal taste. There is nothing wrong with eating slightly green bananas, although underripe bananas are a little harder and thus harder to digest.